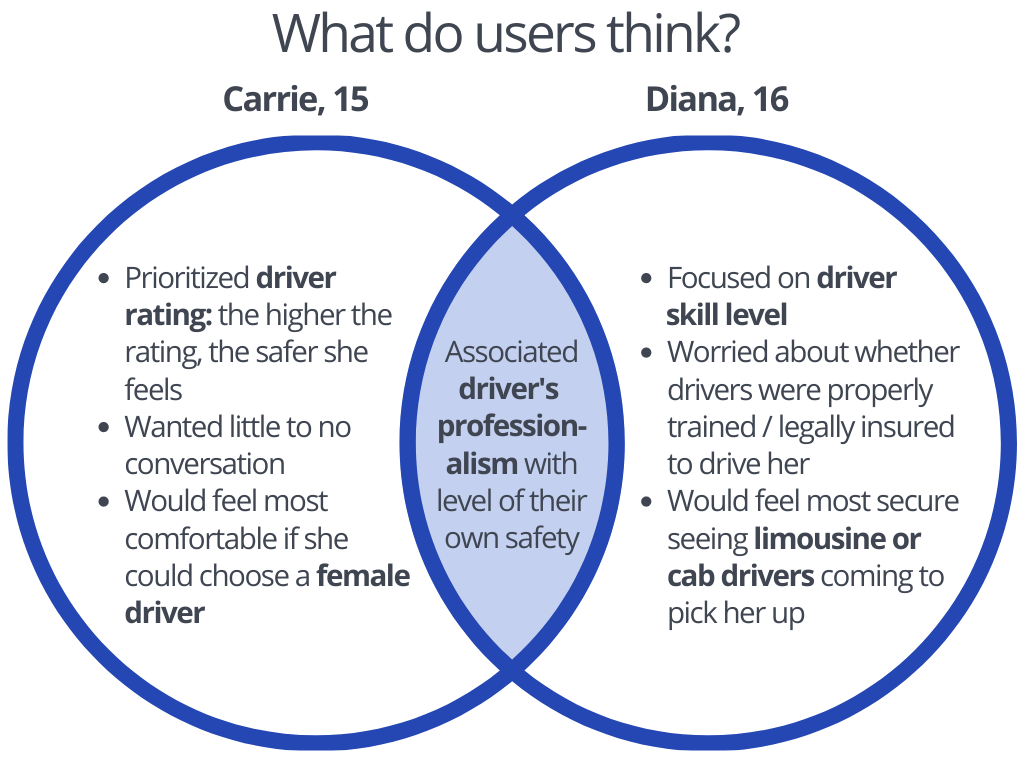 Ridesharing isn’t new anymore. Against the backdrop of public transit’s struggles, new, innovative companies like Uber and Lyft have been able to tap into a market of frustrated consumers by providing a fast and convenient option that can provide ready service in more wide-ranging settings. Uber and its competitors created the ridesharing market with the visage of a white knight, aiding the stranded traveler or the rideless partier.

But ridesharing is still not perfect. Issues arise because of the “giggy,” decentralized nature of ridesharing; rideshare driving is a side job, not a profession, and is conducted in personal vehicles. While serious safety incidents are few and far between, the amateur nature of ridesharing and a handful of high-profile incidents raise concerns among users that the service is not safe.

If they wish to expand market share and improve their bottom line, ridesharing

companies must address problems like these. In so doing, they should start by examining the experience of one of their biggest consumer demographics: women. To better understand how women and other consumers interact with ridesharing, Campus Insights conducted research that focused on ways to improve their brand perception of safety and comfort.

Does ridesharing have a gender issue?

Yes. Research conducted by Campus Insights revealed overwhelming evidence that safety is the largest concern for both men and women when using ridesharing services. Women routinely reported feeling less safe than men when asked the same question.  This disparity indicates that ridesharing may be a less positive overall experience for women.

What is the basis of this problem? Unsurprisingly, the data indicates that the driver is a significant determinant of overall user experience. When users were asked to rate their sense of safety with the driver, both men’s and women’s averages had a strong correlation to their overall safety ratings. After all, the driver is the only foundational variable in ridesharing, and their mannerisms, skill, and professionalism shape how a user perceives their ride.

Further research on driver demographics sheds light on this phenomenon. Put simply, ridesharing drivers are overwhelmingly male. Uber drivers, for example, are 86% male. They tend to be relatively older than their users, as well. While ridesharing is largely a Gen-Z-and-Millennial-targeted service — Americans aged 18-29 use ridesharing 15% more on average — the vast majority of drivers are 30 or older. For the average young female user, an older male driver could be difficult to relate to, especially in unfamiliar settings. This dynamic could leave female users on edge, influencing their perceptions of comfort and safety in the experience.

How can ridesharing accommodate concerns?

We have identified two primary options to explore for improving female and general  user experience with ridesharing : increasing user input on who drives them and providing greater driver information on the app to bridge the familiarity gap. While driver traits that might improve safety will likely vary from person to person, providing the user with input in a few key areas — such as age, gender, and conversation level — could help bridge the familiarity gap that casts the driver as unknown and, potentially, untrustworthy.

Another feature could involve providing the user with a degree of personal information or even ‘fun facts’ about the driver. Anything from education level to favorite sports team could help reduce drivers’ anonymity, humanizing them and creating the potential for more comfortable rapport. When asked about such a feature, Carrie responded positively, explaining that the more she knows about her driver, the safer she’d feel around him or her. This feature would have to be implemented carefully, however, as shown by Diana’s response that she doesn’t want to know too much revealing information about her driver. Thus, an important step during the development of this feature would be determining what types of information best foster a sense of trust and safety.

There are no two ways about it: with the world growing exponentially busier, ridesharing has entered the realm of ubiquity. But if its corporate champions wish to continue their growth, they should consider features like driver input and greater access to personal information. These would be innovative solutions to safety concerns and, if implemented properly, could help ensure the success of the ridesharing sector for years to come.

How companies and Uber and Lyft proceed will determine if ridesharing can be the white knight it promised to be for this young demographic, or if will merely remain another member of the transit round table.

OTHER POSTS
The Unwritten Rules of Instagram and the Rise of “Finstas”
July 23, 2019
Snapchat versus Instagram: Oh, How the Tables have Turned
July 23, 2019
Reddit Redesign: How the Internet Reacted to its New Front Page
July 23, 2019
Fortnite: The Millennial Obsession
August 17, 2018
Questions? Email us at contact@campus-insights.com
Terms of Service    |    Privacy Policy‍
‍© 2018 Campus Insights LLC, All rights reserved.